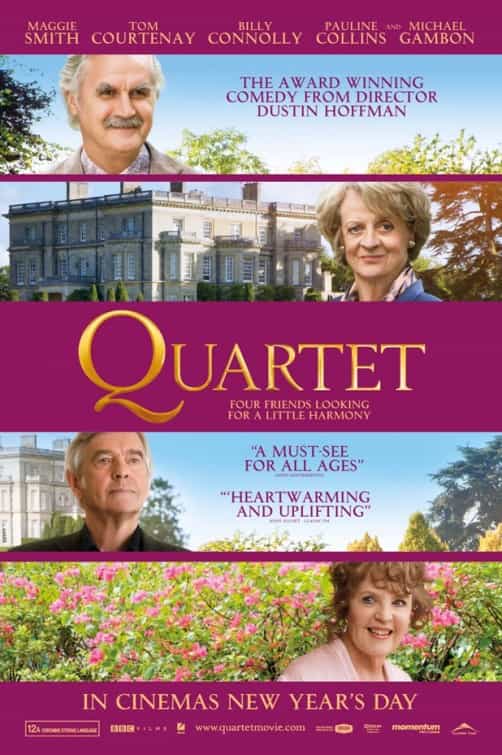 What's your score for 'Quartet'?


Do you have a review or comment for 'Quartet'?

Zombieland: Double Tap is given a 15 age rating in the UK for strong gory comic violence

The followup to director Ruben Fleischer's Zombieland has taken 10 years to get here and the BBFC have given it a 15 age rating in the UK.

Starring the same quartet as the origin of Jesse Eisenberg, Emma Stone, Abigail Breslin and Woody Harrelson Zombieland: Double Tap is based 10 years after the first film.

A whole host of stars are introduced this time and it looks from the trailers like the comedy will continue in the same vein as the first film, which was a bit dead pan but funny.

The BBFC have given the film a 15 age rating for strong gory comic violence and it has a runtime of 98 minutes (1 hour 38 minutes) and a release date of 18th October 2019 in the UK, the film was passed uncut.

Due out later this year check the teaser trailer for The Inbetweeners 2, followup to the successful first movie.

This time the hapless quartet of school leavers head for Australia for more sun, sea and I bet their hoping for a little sex as well.

Its been a long time since the last Ghostbusters film, Do we really want them back?

Ghostbusters was unmistakably a good film and quite naturally a few years after the original a sequel can, the length of time between the original the it's follow up was 5 years and this was most likely down to getting all the original cast time in their schedule to film it, the result was a good film but not a patch on the original.

It's 20 years since the sequel and since then there has been more rumours of a third film than I can think of. Everything for storyline has been mention from a simple reunion of the original quartet most credible rumour being a story line which takes them to hell to an all new cast and one or two of the original crew appearing to "hand over" to a group of youngsters.

All rumours have mostly been quashed except now it seems Columbia Pictures have basically said that the 3rd film is good to go, the interesting twist being the script is not to be written by Ivan Reitman and Dan Aykroyd, who directed and starred in the original, but by upcoming writers Lee Eisenberg and Gene Stupnitsky who currently have on their CV's The Office.

Who writes the script is almost irrelevant really, although it has to try and be good, but really do we want a Ghostbusters 3? Maybe in the early 90's a 3rd instalment would have been good but 20 years later should we not be remembering the films and watching the originals over again to remind us how good they are? Comebacks are the thing though, Indiana Jones has just had a successful return, despite some bad reviews, The X-Files has just returned although maybe not after quite the same length of time, Star Wars enjoyed a successful return and with a name like Ghostbusters that still holds a certain amount of excitement when someone says "who you gonna call..." maybe anytime will be a good time, lets hope the memory of the originals is retained, Star Wars anyone?