Pokémon Detective Pikachu General viewing, but some scenes may be unsuitable for young children. A PG film should not unsettle a child aged around eight or older. Unaccompanied children of any age may watch, but parents are advised to consider whether the content may upset younger, or more sensitive, children.

Do you have a review or comment for 'Pokémon Detective Pikachu'?

A weekly rundown of the UK box office chart headlines over the last 30 years.

The film with the longest run was Dumbo which had been on the box office for 7 weeks.

The top total grossing film of the week was Avengers: Endgame which had taken £80.4 Million after 3 weeks of release.


The number one film was Avengers: Age Of Ultron which had been at the top for 3 weeks and with a total gross of £40.4 Million it was also the top total grossing film.

The top new film of the week was [spooks] The Greater Good directed by Bharat Nalluri and starring Kit Harington and Tuppence Middleton which entered the box office at number 2.

The film with the longest run was Home which had been on the box office for 8 weeks.


The number one film was Iron Man 2 which had been at the top for 2 weeks.

The top new film of the week was Furry Vengeance directed by Roger Kumble and starring Brendan Fraser and Brooke Shields which entered the box office at number 2.

The film with the longest run was Nanny Mcphee And The Big Bang which had been on the box office for 7 weeks.

The top total grossing film of the week was Clash Of The Titans which had taken £19.9 Million after 6 weeks of release.

The longerst run on the box office and the top total grossing film was Hitch which had taken £17.3 Million over 9 weeks of release.


The number one film was Kevin And Perry Go Large which had been at the top for 2 weeks.

The top new film of the week was Man On The Moon directed by Milos Forman and starring Jim Carrey and Gerry Becker which entered the box office at number 6.

The longerst run on the box office and the top total grossing film was American Beauty which had taken £21.2 Million over 15 weeks of release.


The number one film was Outbreak which had been at the top for 2 weeks.

The top new film of the week was Milk Money directed by Richard Benjamin and starring Melanie Griffith and Ed Harris which entered the box office at number 3.

The longerst run on the box office and the top total grossing film was Star Trek Generations which had taken £20.1 Million over 13 weeks of release.

The film with the longest run was Honey I Shrunk The Kids which had been on the box office for 14 weeks.

The top total grossing film of the week was Look Who's Talking which had taken £10 Million after 6 weeks of release.

UK Box Office Analysis 31st May - 2nd June 2019: Aladdin beats Godzilla in a battle to remain at the top for a second week

The pull of Disney's Aladdin live action was far too great for the British public and the film stays at the top of the UK box office for a second weekend leaving Godzilla to enter the box office at number 2.

The Guy Ritchie directed movie stays at the top with a weekend gross of £4.8 million which pushes its total UK gross to £19.7 million.

The film is doing well for a Disney live action remake although not as well as Beauty And The Beast which by its second weekend has taken nearly £40 million.

With this in mind the Genie movie should end up somewhere near the £35 million mark which should mean its Guy Ritchies top film to date and it could become Will Smiths top UK film to date.

The Monster movie sequel was a favourite to hit the top of the box office this week but with a £3.5 million debut it wasn't quite good enough.

The film lands at number 2 this week which is half that of Gareth Edwards 2014 film, even more worryingly this is lower than Roland Emmerich 1998 film which landed at number 1 with £4.1 (not adjusted for inflation).

The animated comedy stays at number 3 on its second weekend with a weekend gross of £2.9 million which pushes the films total gross to £11.8 million.

The film is running below the 2016 original which had taken £16 million by its second weekend of release.

The Elton John bio-film falls to number 4 this weekend with a gross of £2.4 million to boost its total to £11.9 million.

Despite the good reviews the film is not doing as well as Bohemian Rhapsody although with a high grossing top 4 this has effected its chart position although the Freddy Mercury film had made almost double on its second weekend of release.

The Nintendo property keeps its top 5 position this week, at number 5, with a weekend gross of £664,469 which pushes its total UK gross to £12.5 million.

The Marvel mega hit falls to number 8 this weekend, but still only in its 6th weekend the film has taken £86.9 million.

UK Box Office Analysis 24th - 26th May 2019: Aladdin flies to the top on its opening with a 7 million pound bank holiday weekend debut leaving Rocketman to enter at 2

On this weeks UK box office Disney brings its live action remake of Aladdin to the box office, directed by our very own Guy Ritchie, which scores a big number 1 debut, in a weekend with an all new top 3, this leaves Rocketman and The Secret Life Of Pets 2 to enter at 2 and 3. 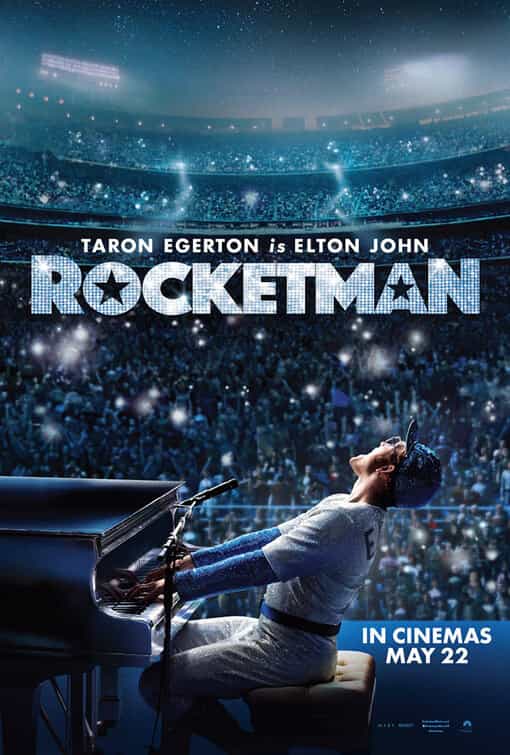 The latest in the increasing line of live action remakes enters the UK box office, with ease, at the top.

The film starring Will Smith and Mena Massoud as the Genie and Aladdin takes over at the top with a £7 million debut.

This is by no means as good as 2017's Beauty And The Beast which has an opening weekend of £19 million but it is higher than this years Dumbo.

The Elton John fantasy bio-pic manages to take a fantastic £5.4 million on its debut weekend, but unfortunately released the same day as a Disney movie it only manages a number 2 debut.

The film Directed Dexter Fletcher and Starring Taron Egerton and Jamie Bell has wowed critics and if it repeats a similar course as Bohemian Rhapsody it will hand around a while and could still hit the top of the box office.

The Freddy Mercury film debuted to nearly £10 million and went on to take £55 million in the UK, I dont think this will repeat those figures.

Third new film in the top three and again under normal weekend conditions this would have been the top film but a £3.5 million debut this week means it hits number 3.

Compared to the first movie in the series this is actually way lover with that film taking nearly £10 million on its debut, but with the school holidays just around the corner this could have a long life.

The Keanu Reeves action movie falls from the top to number 4 on its second weekend of release with £1.4 million boosting its total to £6.2 million.

Three weeks on and the Pikachu movie is at 5 with £1 million over the weekend, this gives the film a new total of £10 million.

Falling out of the top 5 fir the first time this week the Marvel movie has now taken £85.5 million in the UK over 5 weeks.

It is the 5th top movie of all time in the UK where it will probably remain, behind Avatar, Spectre, Skyfall and Star Wars: The Force Awakens

Making an entry back into the top 15 after a time away the brick movie takes £43,254 on its 9th weekend which boosts its total to £18.6 million.

With Avengers: Endgame at the top of the UK box office there are 6 new films looking to challlenge it this weekend at your local multiplex. First up at cinemas this week is new movie The Curse Of La Llorona from Michael Chaves who is directing for the first time.

It stars Linda Cardellini who last starred in Green Book and Roman Christou who is making a feature film debut.

Next on the new release schedule is Hotel Mumbai, this new movie stars Amandeep Singh and Suhail Nayyar.

The film is brought to us by new director Anthony Maras.

Also out this week is Extremely Wicked, Shockingly Evil, And Vile which is directed by Joe Berlinger who directed Book Of Shadows: Blair Witch 2 in 2000.

Also this week there is Long Shot from director Jonathan Levine who also directed The Night Before in 2015.

The long list of new releases continues with Tolkien which is directed by Dome Karukoski who directed Tom Of Finland in 2017.

Finally there is A Dogs Journey from director Gail Mancuso making their directorial debut, the film stars Dennis Quaid and Betty Gilpin.