As Luck Would Have It

What's your score for 'As Luck Would Have It'?


Do you have a review or comment for 'As Luck Would Have It'?

May the Force BT with You? BT tower becomes giant Lightsaber

Sorry about the pun! To mark the release of the full Star Wars Saga on Blu-ray for the first time BT turned the BT Tower into a giant Lightsaber, and pretty cool it looked too.

As luck would have it the body of the tower does resemble the handle of a Star Wars Light Saber, so they then projected a very powerful light from the top to get the effect.

Turning on the Lightsaber was the man behind C-3PO Anthony Daniels and the party that took place at the top of the tower was attended by many other stars from the saga.

If you feel you need to get the Blu-ray version of the films, with all the new changes that have happened over the past 40 years then you can buy it via Amazon.co.uk

Check out the picture and video below to see the tower in action. 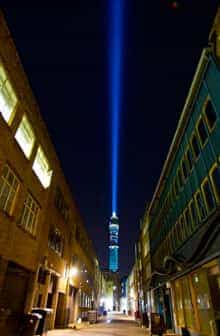