Yesterday Films classified 12A contain material that is not generally suitable for children aged under 12. No one younger than 12 may see a 12A film in a cinema unless accompanied by an adult. Adults planning to take a child under 12 to view a 12A film should consider whether the film is suitable for that child. To help them decide, we recommend that they check the Ratings info for that film in advance. 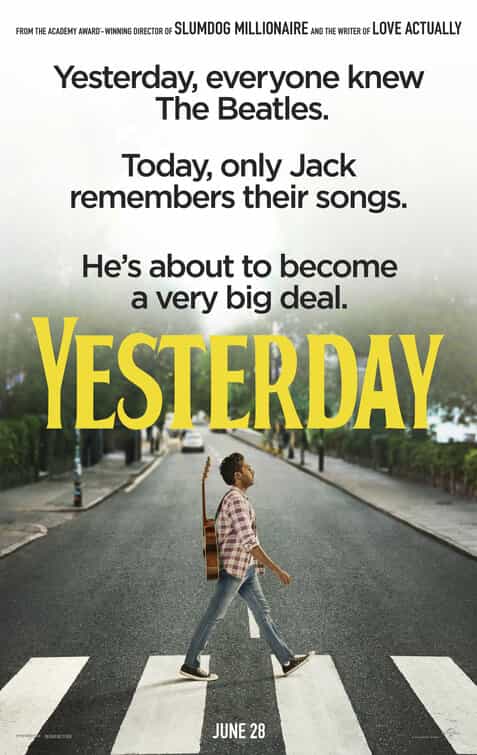 What's your score for 'Yesterday'?


Do you have a review or comment for 'Yesterday'?

As promised yesterday Pixar and Disney have released the first trailer for their upcoming Italian inspired movie Luca.

The movie is set in the Northern part of Italy and is set in and around around the ligurian culture and its people.

The story is based around two young friends who have a deep secret that when water touches them they turn into sea monsters, it is based on Northern Italian folklore which the director grey up hearing.

The movie is directed by Enrico Casarosa who was an artist on Pixar's Coco and you can tell in this trailer as it just spills with the same style and feeling of that movie.

The movie is voiced by Jacob Tremblay and Jack Dylan Grazer in starring roles and is released on June 18th - the trailer doesn't say if it will be theatrical or Disney+!

We all saw this coming, Bond 25, No Time To Die, gets delayed to April 2nd 2021, as year after original release date

The new Bond movie No Time To Die has been hanging on to its November release date since it originally got delayed due to the COVID-19 pandemic but today it gives in and the release date moves to April 2nd 2021.

Universal, the distribution company for the Bond series released this statement:
"MGM, Universal and Bond producers, Michael G Wilson and Barbara Broccoli, today announced the release of No Time To Die, the 25th film in the James Bond series, will be delayed until 2nd April in order to be seen by a worldwide theatrical audience, we understand the delay will be disappointing to our fans but we now look forward to sharing No Time To Die next year."

This is the latest of the big end of year movies to get moved to 2021 and with only a few left including Wonder Woman 1984 and Death On The Nile this is leaving 2020 very empty.

With cinemas struggling to reopen safely and attendance in those that have opened struggling even with only 25 - 50% capacity as evident with Tenet's poor box office figures it is no wonder the movie has been delayed.

Film distributers are starting to realise that 2020 is now basically a write off, but this is clearly having an effect on cinema chains that are struggling to stay in business.

The music video for the theme song by Billie Eillish was only released yesterday so this is perhaps strange timing, although the press for this movie is all over the place as the song hit number 1 on the music chart back in February, a couple of months before the original release date!

This is Daniel Craigs reported last outing as Bond but he's perhaps going to have to hang on a little longer for all the press junkets that will happen in March/April next year.

MGM, Universal and Bond producers, Michael G. Wilson and Barbara Broccoli, today announced the release of NO TIME TO DIE, the 25th film in the James Bond series, will be delayed until 2 April 2021 in order to be seen by a worldwide theatrical audience. pic.twitter.com/NqHlU24Ho3

The Disney film The Lion King continues to rule to global box office with a mammoth weekend gross and Chinese film Ne Zha makes its debut at number 2.

THe Disney live action remake spends its 3rd weekend on the global box office and takes $218.3 Million from 54 countries.

This pushes the films total global gross to $962.6 Million meaning the film will make it past the Billion mark next weekend.

The Chinese animation hit the box office this week nad took $83.1 Million ($92.2 including previews) from just the single country.

This makes the film the highest grossing debut in China for an animated movie beating Zootopia which held the record previously.

Maverick director Quentin Tarantino brings his new film to the global box office and after good reviews scores his biggest debut to date.

The Marvel web slinger movie from Sony took $33.2 Million from 8 countries this weekend on its 5th weekend of release.

This pushes the film past the magic $1 Billion mark on the global box office and its the 9th Marvel film to do this, the third this year alone.

Finishing of the top 5 this week is the Pixar animation which take $29.2 Million from 41 countries on its 6th weekend.

The Chinese film is at number 6 this week with a total gross of $107.6 Million pushing the film past the $100 Million global mark.

Sitting at number 7 this week is the Disney live action film which this week passes the $1 Billion mark at the global box office.

Danny Boyle's Beatles homage is at number 9 this week and with a total global gross of $109.6 Million goes past the $100 Million mark at the global box office.