Bridesmaids No one younger than 15 may see a 15 film in a cinema. 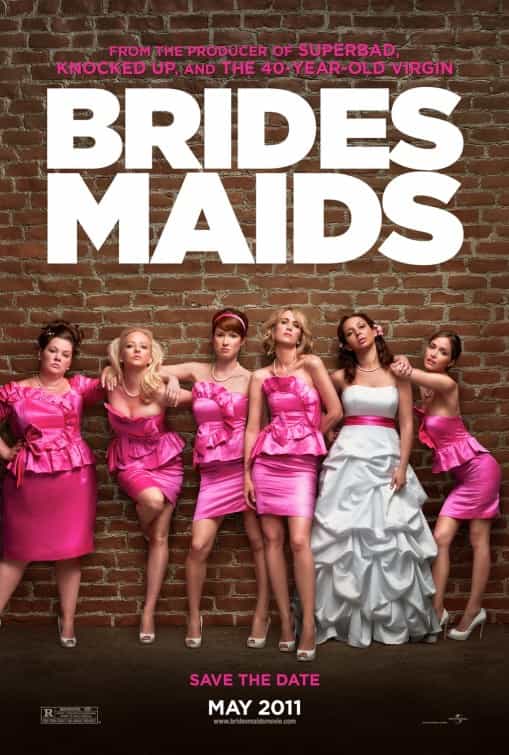 What's your score for 'Bridesmaids'?


Do you have a review or comment for 'Bridesmaids'?

The UK box office this weeks has a new number one film in the shape of The Secret Life of Pets. the latests film from the makers of Despicable Me and Minions.

An excellent weekend gross of £9.5 million sees the film enter ahead of the weeks other big film Independence Day Resurgence.

Despite having the connection to the Despicable Me franchise The Secret Life of Pets for a new franchise makes an very good debut, in comparison it is far higher that the first Despicable Me but lower than the franchises other films.

With the summer holidays in the coming weeks this could have staying power, and there is little competition until mid July.

Also new this week is Independence Day Resurgence which makes its debut at number 2 with just over £5 million, its been 20 years but the original debuted to £16 million.

Last weeks top film, The Conjuring 2 The Enfield Case, falls to number 3 with a total gross of £7.7 million after a £1.5 million second weekend.

A year ago
Minions made its debut at the top knocking Jurassic World to the runner up spot.

Five years ago
Paul Feig's Bridesmaids was the new film making its debut at the top while Kung Fu Panda 2 fell to number 2.

Ten years ago
The Fast and The Furious Tokyo Drift stayed at the top of the box office and The Lake House was the top new film at number 2.

Fifteen years ago
Evolution was the top new film at number 1, it knocked Pearl Harbour down to number 2.

Twenty years ago
New at the top was The Rock with Spy Hard being knocked off the top right down to number 4.

Twenty five years ago
The Silence of The Lambs stayed at the top of the box office while The Pope Must Die came in new at number 2.

A hot weekend meant that business at the UK box office was slow hence the top 15 in the UK took just under £10 million in total.

Paul Feig directs Melissa McCarthy is the number 1 film this week which makes it's debut on the UK box office.

The critically acclaimed comedy from the same director and star as Bridesmaids from 2011 this weekend took £2.5 million, low for this time of year.

Last weeks top film, San Andreas, falls a single place to number 2 with a weekend gross of £1.7 million, this gives the film a 10 day gross of £8.3 million and it will be the highest grossing Dwayne Johnson starring film.

Interesting note: If the chart had been based on Monday - Sunday ticket sales San Andreas would have been the top film.

Also worth a mention is The Empire Strikes Back which is “new” at 8, the reason being, like Back To The Future last year, Secret Cinema have a couple of month of event showing for the film and this weekend took £304,115.

A year ago
This time last year 22 Jump Street made it's debut in the UK at the top of the Box office knocking Maleficent down to the number 2 spot.

Five years ago
Sex and The City 2 retained it's hold at the top while the highest new film was Death At A Funeral right down at number 4.

Ten years ago
Still holding on at the top was Star Wars Episode III: Revenge of The Sith, it held off Sin City which entered the box office at number 2.

Fifteen years ago
Oscar winner Gladiator was still at number 1 while the highest new film of the week was at number 3 in the shape of Maybe Baby.

Twenty years ago
Jack and Sarah was the top new film across the country knocking Street Fighter from the top into second place.

Twenty five years ago
Back in 1990 the top film of the month of June was Back to The Future Part III was the top film while Pretty Woman was still doing good numbers as was Dick Tracy.

This week we see the release of Melissa McCarthy's new film Tammy and another teen horror/drama/fantasy film in the shape of Vampire Academy.

Melissa McCarthy has become a big star over the last few year with her turn in Bridesmaids and The Heat, this looks set to be another good comedy with McCarthy and co-star Susan Sarandon in to for, this could be the top film of the weekend.

Based on the novels by Richard Mead Vampire Academy boils down to St. Trinian's with vampires. This has a good teen following which could see it get into the top 5 but a limited following and little hype will see it disappear quickly.

Other new films this weekend are: Saturday sees preview showing in some cinemas for the much anticipated new Transformers: Age of Extinction before it's full release next weekend.