Searching Films classified 12A contain material that is not generally suitable for children aged under 12. No one younger than 12 may see a 12A film in a cinema unless accompanied by an adult. Adults planning to take a child under 12 to view a 12A film should consider whether the film is suitable for that child. To help them decide, we recommend that they check the Ratings info for that film in advance. 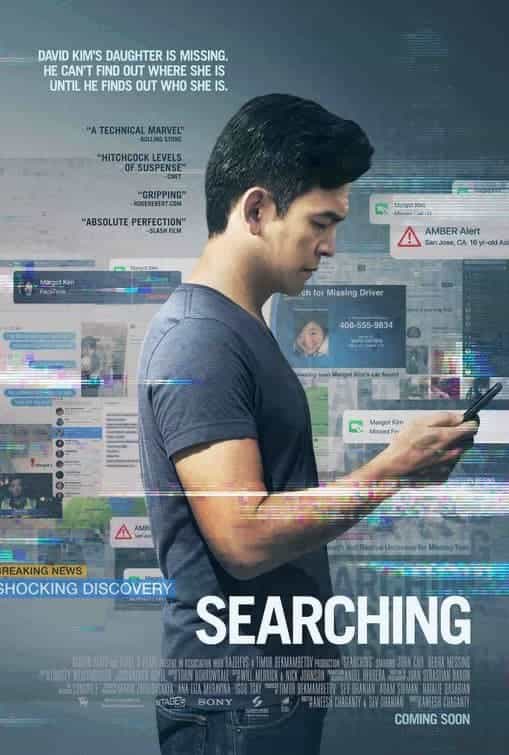 What's your score for 'Searching'?


Do you have a review or comment for 'Searching'?

Toy Story 4 gets an age rating of U in the UK for very mild violence, scary scenes

The Pixar movie Toy Story 4 has been age rated by the BBFC and given a U certificate for very mild violence, scary scenes.

The fourth film in the Toy Story saga has all your favourite characters back for more adventures, this time it looks like its set in a travelling amusement park and Woody seems to get lost with the rest of the toys of Buzz Lightyear, Rex and Mr Potato Head et el searching for him.

The original three films are considered one of the greatest film trilogies of all time sitting alongside the likes of the original Star Wars trilogy and The Lord Of The Rings trilogy.

Hence there are high hopes for the new movie and judging by the trailers Pixar wont be disappointing us.

The BBFC have given the film a U age rating for very mild violence, scary scenes and it has an official run time of 100 minutes (1 hour 40 minutes).

US Box Office Weekend 7th - 9th September 2018: The Nun scares audiences in the run up to Halloween

Continuing the Conjuring series this week The Nun takes on the box office and wins with the second highest opening gross for a September movie in the US.

The film manages the highest opening of the series so far with a $53 million weekend and should keep up some momentum until Halloween which is still 6 weeks away.

Falling to number 2 this week after a 3 week run at the top is Crazy Rich Asians, a $13 .6 million weekend brings the films total US gross to $136.2 million

New at number 3 is Peppermint from director Pierre Morel who directed Taken and stars Jennifer Garner, the film takes $13.2 million on its debut.

The Meg has been around for 5 weeks now and this weeks takes $6 million which places it at 4, the films total US gross is $131.5 million.

Falling to number 5 this week is Searching which takes $4.5 million to bring its total gross to $14.3 million after 2 weeks.

The top total grossing film on the US box office this week is Mission:Impossible Fallout which has taken $212.1 million so far and has been out for 7 weeks.

For the third weekend straight the top two films in the UK are Disneys Christopher Robin and the sequel movie Mamma Mia! Here We Go Again.

Christopher Robin's gross for the weekend, and unlike last weekend the only film to go a million pound, is £1.1 million which brings the films total after 3 weeks to a very respectable £10 million.

Staying on the runner up spot yet again Mamma Mia! Here We Go Again takes just under a million pounds, this now brings the films total to £61.6 million.

The top film so far in 2018 is Avengers: Infinity War with £70.8 million, there is every possibility that the Mamma Mia! sequel could beat this, but it could be a very close race.

Despite taking a little less than last weekend BlackKKlansman climbs the box office this weekend to number 3 with £922,806 which brings the films total after 2 week to £3.1 million.

Finishing off the top 5 is new entry Searching which makes its debut with £765,050.

There is no moving those Crazy Rich Asians from the top of the US box office as the films makes it a third week at the top with the top new film coming in at number 4.

The Sleeper hit's US gross is climbing slowly but surely as the weekend take comes in only a few percentages lower than last week at $22.2 million.

This brings the films total gross after 3 weeks to $111 million, the film has the wides release on the box office with 3.865 theatres.

Staying at number 2 for another week is The Meg which takes $10.5 million over the weekend to bring its total to $120.5 million after 4 weeks on release.

At 3 is Mission:Impossible Fallout which takes $7 million on its sixth weekend bringing the total gross to $204 million.

Highest new film of the week is at number 4, Directed by Chris Weitz and starring Oscar Isaac and Ben Kingsley Operation Finale comes in with a debut gross of $6 million.

Finally in the top 5 is new film Searching which takes $5.7 million over the weekend on its debut.

Released this week at UK cinemas, Brad Pitt is fighting Zombies in World Was Z, an apocalyptic set movie based on the novel by Max Brooks.

There has been some buzz surrounding this film in the run up to it's release and Brad Pitt is always a major box office potential but Superman will seriously effects it's box office and probably stop being a number one hit.

Ethan Hawk and Julie Delpy continue their relationship onscreen on Before Midnight, the third film to feature these characters. Again directed by Richard Linklater.

The series has a fan base, but it's small and the film will have the same impact on home video so a top 10 hit is probably on the cards.

Finally Dwayne Johnson stars as a desperate father searching for the truth in Snitch.

Johnson has a fan base but the subject matter may turn people off, this may miss out on the top 10 altogether.