Suffragette Films classified 12A contain material that is not generally suitable for children aged under 12. No one younger than 12 may see a 12A film in a cinema unless accompanied by an adult. Adults planning to take a child under 12 to view a 12A film should consider whether the film is suitable for that child. To help them decide, we recommend that they check the Ratings info for that film in advance. 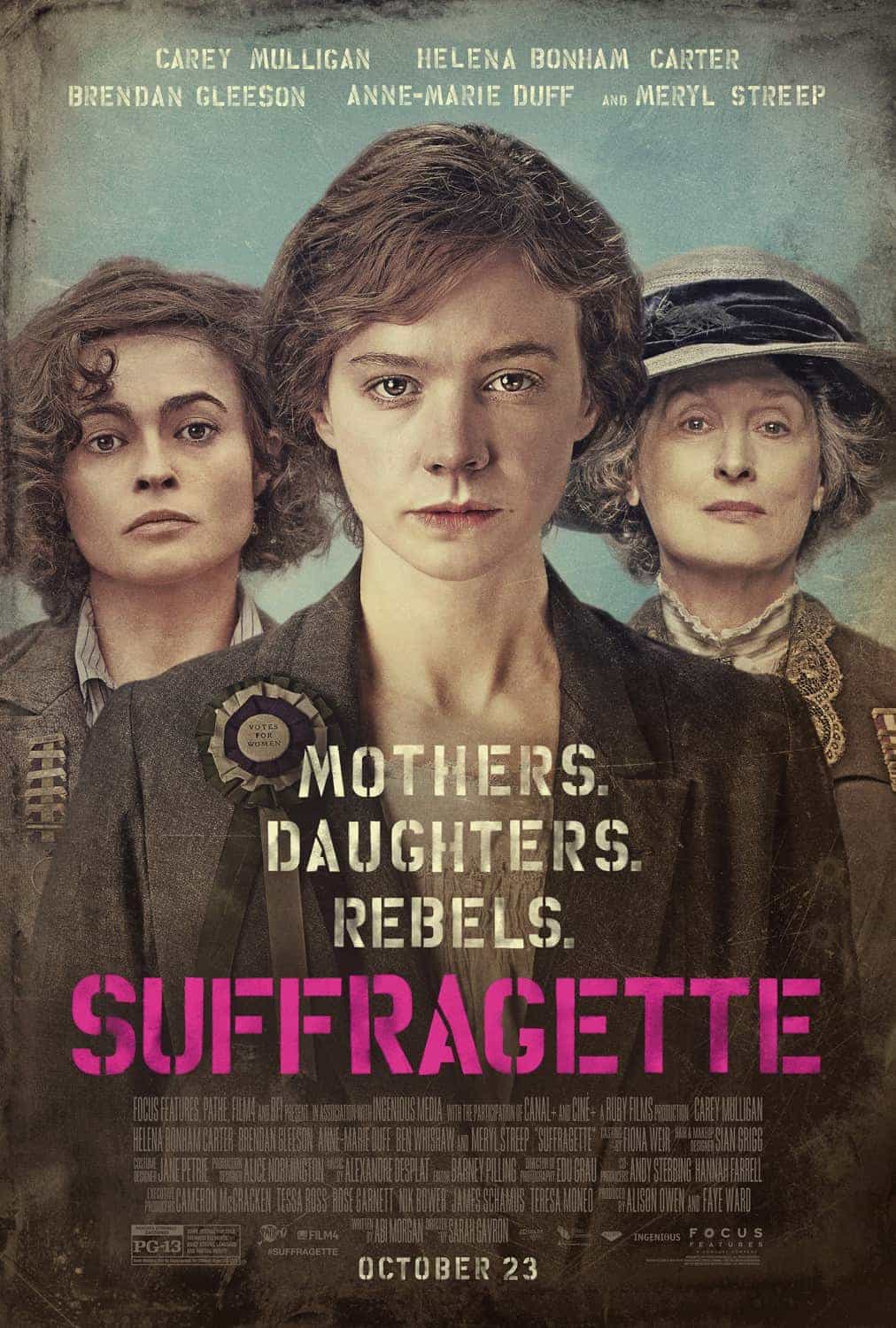 What's your score for 'Suffragette'?

Do you have a review or comment for 'Suffragette'?

On the UK video chart this week Spectre manages to hold on to the top spot for a second week while war time drama Suffragette is the highest new film.

After a fantastic showing on the video chart last week there was no move for the latest Bond movie this week with sales too strong for any of the new releases.

Suffragette was the highest new film at 2, the film was released into UK cinemas on 16th October 2016 where it has a debut week at number 2.

The film put in 6 weeks inside the top 15 films in the UK before hanging around the box office for another 12 weeks and was still in some cinemas last weekend.

The film didn't bust any balls at the box office but did manage to rake in a fairly good £9.9 million over its run.

Also new on the video chart this week is: Brooklyn entering at number 3, The Intern new at number 8 and finally Paranormal Activity The Ghost Dimension at number 9.

The best new films of 2015 - what are we looking forward to the most this year?

What are the films were looking forward to the most in 2015? Here is our list of the 15 films were most excited about this year.

Do you agree? Have we missed something off? Let us know what you think of this list.

So in order of release date here it is.

Big Hero 6 - Disney always have a place in cinema and here is their latest effort, released last year in America it got great reviews.

Fifty Shades of Grey - Despite the trashy nature of the novel the trailer for this have made it look, if nothing else, intriguing.

Chappie - Neill Blomkamp delivered with District 9 and brought the interesting Elysium to the screen, the trailer looks good.

The Divergent Series Insurgent - Divergent was surprisingly good and has whetted the appetite for this sequel.

Avengers: Age of Ultron - Avengers was simply brilliant and this should deliver action and drama in ample doses, Joss Whedon can do no wrong!

Pixels - it may have Adam Sandler in it but the concept just makes us want to see this big time.

Tomorrowland - Fascinating concept and with George Clooney, it will be either great or just terrible!

Jurassic World - 14 years later the world of dinosaurs has evolved to a fully working theme park as visualised in the original, of course things go wrong!

Terminator: Genisys - Love or hate the idea behind this it will either revive or kill the series, and how else could they have brought an ageing Arnie back?

Minions - The best of the Despicable Me series gets their own film, the trailer have the laughing out loud.

Inside Out - Pixar are back with a take on the Hermans Head idea, even Pixars worst and really great so high expectations for this.

Suffragette - Maybe its because we know someone in this film, or maybe it's because of the all star line up but were really looking forward to this.

Spectre - It's Bond, it's the follow up the the Uk's highest grossing film ever, it will be great, nothing more to say.